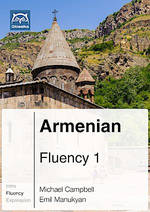 The Armenian language (հայերեն լեզու, IPA: [hajɛɹɛn lɛzu] — hayeren lezu, conventional short form hayeren) is an Indo-European language spoken by the Armenian people. It is the official language of the Republic of Armenia as well as Nagorno-Karabakh (a de facto republic but de-jure part of Azerbaijan). The language is also widely spoken by Armenian communities in the Armenian diaspora. It has its own script, the Armenian alphabet.

Linguists typically classify Armenian as an independent branch of the Indo-European language family. Some Indo-Europeanists, notably Clackson (1994), have proposed that Armenian may have been grouped together with the Hellenic branch (Greek). This is called the Graeco-Armenian Hypothesis, in combination with a Graeco-Aryan hypothesis (Renfrew, Clackson and Fortson 1994).