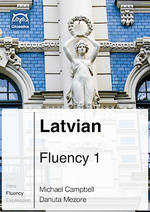 There are three dialects in Latvian: the Livonian dialect, Latgalian and the Middle dialect. The Livonian dialect is divided into the Vidzeme variety and the Courland variety (also called tāmnieku or ventiņu ). The Middle dialect, the basis of standard Latvian, is divided into the Vidzeme variety, the Curonian variety and the Semigallian variety. Note: Latvian dialects should not be confused with the Livonian, Curonian, Semigallian and Selonian languages.

The Livonian dialect of Latvian was more affected by the Livonian language substratum than Latvian in other parts of Latvia. There are two intonations in the Livonian dialect. In Courland short vowels in the endings of words are discarded, while long vowels are shortened. In all genders and numbers only one form of verb is used. Personal names in both genders are derived with endings - els, -ans. In prefixes ie is changed to e . Due to migration and the introduction of a standardised language this dialect has declined. It arose from assimilated Livonians, who started to speak in Latvian and assimilated Livonian grammar into Latvian.