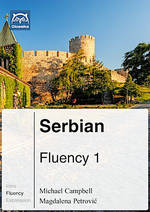 There are five vowels in Serbo-Croatian language. They can be both long and short.

Unfortunately, neither stresses (which can fall at any syllable) nor vowel lengths are marked in the written language, but the stress is more predictable than it is in Russian, where it is almost obligatory to put an accent on the stressed syllable. For example, in the sentence sam sam (I am alone), the first "sam" is long, and the second is short (SAHM sam); in the clause da da (that he/she gives), it's reverse (da DAH). The most notorious example is a pun Gore gore gore gore (Up there, forests are burning worse), however, it is not likely that you will use this sentence in everyday speech. In practice, the second or third-last syllable of any word is almost always stressed, and stressing the wrong syllable rarely creates misunderstandings.