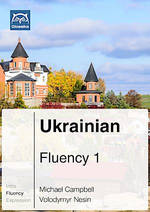 Old East Slavic (and Russian) o in closed syllables, that is, ending in a consonant, in many cases corresponds to a Ukrainian i, as in pod->pid ‘under’. Thus, in the declension of nouns, the o can re-appear as it is no longer located in a closed syllable, such as rik (nom): rotsi (loc) ‘year’.

Ukrainian case endings are somewhat different from Old East Slavic, and the vocabulary includes a large overlay of Polish terminology. Russian na pervom etazhe ‘on the first floor’ is in the prepositional case. The Ukrainian corresponding expression is na pershomu poversi. -omu is the standard locative (prepositional) ending, but variants in -im are common in dialect and poetry, and allowed by the standards bodies. The x of Ukrainian poverx has mutated into s under the influence of the soft vowel i (k is similarly mutable into ts in final positions). Ukrainian is the only modern East Slavic language which preserves the vocative case.

There have been some disputes over the existence of the dual number of the noun. Ilko Korunets' argues that nouns in Ukrainian as well as in Russian and a few other Slavonic languages, have three numbers: singular, dual and plural. He pointed out that there is a difference in noun forms which are used with different numerals. For example: odyn rik, ‘one year’ — dva/try/chotyry roky, ‘two/three/four years’ — pjat’... rokiv, ‘five etc. years’. But he seems to represent the very rare opinion. The overwhelming majority of linguists finds only two numbers (singular and plural). See also Ukrainian grammar or Russian grammar.